If IT Ain't Broke, Don't Fix IT - The need for Ongoing Proactive IT Support is an Idea Some People are Reluctant to Embrace. | TRINUS 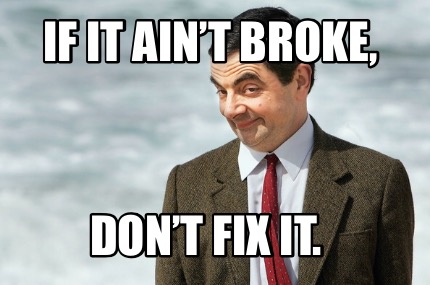 Blog / If IT Ain’t Broke, Don’t Fix IT – The need for Ongoing Proactive IT Support is an Idea Some People are Reluctant to Embrace.

Growing up in Vancouver, I remember helping my Dad with car repairs. It bordered on a Saturday morning ritual. My job was to pass him the tools he needed and listen to his running commentary on how the repair was proceeding. It wasn’t always going well, judging by the colourful language occasionally used.

We couldn’t afford new cars, so we always bought one that was anywhere from 2 to 5 years old. Dad loved to tinker and there was always plenty to keep us busy maintaining the car in the best condition we could. We focused on the engine. Back-in-the-Day, engines needed a lot of maintenance. The ignition system used parts that were designed in the early 40’s – breaker points, condensers and a coil. Breaker points (Points) were nothing more than crude, spring-loaded switches that operated when the distributor cam rotated past them. They were always needing attention. The fuel system used a carburetor which mixed the fuel and air to make the engine run. The Carb was a finicky device with dozens of tiny parts, each of which required careful cleaning and adjustment to make the car perform at it’s best. We weren’t alone; the corner service stations were built because cars needed constant maintenance.

But Technology spelled the demise of the service station industry. Among the many advances, antiquated ignition systems gave way to electronics and carburetors were superseded by fuel injection. Almost overnight, the need for careful and regular maintenance to keep your car on the road disappeared. Service Stations became 7-Elevens, carbs now refer to potatoes and bread, and points are what we collect on loyalty cards. Today, you open the hood to put Windshield Washer fluid in – and not much else. We’ve developed an If it Ain’t Broke, Don’t Fix It mentality with cars.

Why should you care?

We tend to think of our Information Technology in the same way as our modern cars – as black box commodities that don’t need cleaning, maintenance, or adjustment. For the most part, modern computer hardware is non-serviceable and extremely reliable; no one is cracking open their Smartphone to replace the CPU or adjust the supply voltage. While you can take the covers off of your workstation or server, no one does, unless a Tech needs to replace a part. But even those instances are rare.

When it comes to software, the story is much different. The dozens of applications installed on the typical workstation are made up of millions of lines of code. Most of us will remember that even one comma or period out of place in software code can cause an unpredictable error. With millions of code lines, there are bound to be several built-in errors. Another problem with software is the wide diversity of vendors producing these applications. Their levels of quality-assurance are different and they have little control over how their applications are installed or used. Will Application A cause Application B to crash or behave erratically?

Servers often have 10 times the amount of software application code found on a workstation.

So when we get a call that the server has crashed, or the workstation can’t login, we’re most likely dealing with a software problem. Software needs constant Cleaning, Maintenance & Adjustment (CMA.) I recently scanned our new HelpDesk system, and we had 70-plus requests for service in the queue. Only one could be traced to a possible hardware failure.

When we say software needs:

Cleaning: Most of us have experienced slow computers; somehow over time the computer loses performance. In fact, the hardware rarely causes a slowdown; it’s the software that builds-up over time that causes the problem. Multiple versions, unused code segments (called DLLs) or utilities, and bloated or corrupted configuration files all contribute to making a computer – or server – slow. Periodically, these applications need to be cleaned up.

Maintenance: Just about every application has periodic updates. We are all very familiar with Microsoft’s monthly updates to Windows, Office and their other applications. But most software vendors release regular updates too and they also need to be applied, to keep the application compatible with changes to the operating system, and to correct code bugs and Security flaws that have been discovered.

Adjustment: Applications are seldom ready-to-go out of the box. Almost all have configuration files that allow users to customize how the application is used and how it processes information. Most users are familiar with workstations that allow us to change desktop settings (tracked in a configuration file called the Registry), but servers have hundreds of configuration settings. The biggest one is called Active Directory (AD.) Its’ primary function is to track users’ accounts and permissions to files across the entire network. A server has hundreds of other settings that work in the background to customize the server environment for the organization’s network. We regularly reconfigure several settings on a server as part of regular proactive inspections.

But many people – including prominent business owners and managers – think that if the hardware is still running, it doesn’t need any CMA. They have trouble justifying preventative maintenance and proactive service, or service plans that allow us to respond quickly and predictably to calls for help. The engine is still running they argue; if it ain’t broke, don’t fix it!

In rare instances, we’ve seen servers that haven’t been touched in years, and when we’re asked to troubleshoot a problem, the chances of a complete and catastrophic system crash are very high. More than once, it’s triggered an emergency server replacement, complete with unplanned and extended downtime, and extra cost. It’s never a pleasant experience. Thankfully, these instances are not the norm.

We’ve recently upgraded our service plans to include much more proactive CMA; in most cases almost doubling the items we Clean, Maintain, and Adjust. Many of these items are due to the increased threat from cyber criminals, but operating systems and applications are much more sophisticated than they were, even 5 years ago. Unfortunately, it takes more time, and so support costs are also rising.

I still have a vintage car that needs a Carb adjustment occasionally, but the points have been replaced with electronic ignition. I just can’t get away from Saturday morning tinkering; I enjoy it far too much. Just ask my wife.